This 1957 Chevrolet Van was owned by the Liberty Fire Co. of Sinking Spring. It was originally utilized as a utility truck and personnel carrier. In the mid-1990's the unit was refurbished and equipped to serve as a mass-casualty unit. 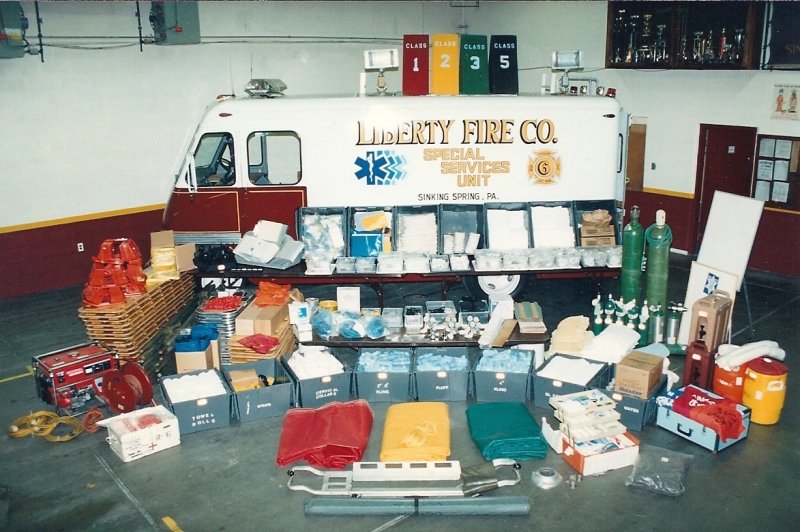 Earlier this evening around 6pm the WBFD was dispatched to an accident with injuries on Penn Ave in the area of Woodrow Ave in Sinking Spring Borough. Crews were on scene for approximately 30 minutes until the scene could be cleared and the eastbound lane was reopened. We were assisted by Township of Spring Fire Rescue Services, Western Berks Ambulance Association, Sinking Spring Borough Police Department, and Spitlers Garage & Towing. #teamWBFD ... See MoreSee Less

Thank you for your service.

Yesterday morning at approximately 6:30am the WBFD was requested by Search 93 - South Central PA Search and Rescue and Porters Fire Company to respond to Heidelberg Township, York County for our thermal UAS capability to assist them with an ongoing search for a missing endangered teenager. Our UAS resources arrived a little after 7:30am in York County and met with Unified Incident Command comprised of Fire and SAR officials who briefed us of the current situation, nearby area and individual they were looking for. At the point of our arrival crews from a multitude of public safety organizations from PA and MD had been working through the night and thunderstorms searching for the missing individual since around 7pm the night prior.

Our UAS flew several flights and and logged nearly two hours of flight time while working to search areas which included cornfields, brush and woods near the home of the missing teenager. With the thermal capability of the UAS the pilot was able to confirm the missing teenager was not in the area we were assigned to search which totaled nearly 350 acres. In the end the teenager was eventually located around 1pm yesterday by a resident in the area who was checking on their property after hearing about the missing person on the news.

In this incident our UAS was able to effectively clear a large area of hard to access terrain from the air which would have normally taken ground crews hours to walk by foot, not to mention the amount of people required to do so. With our UAS working the area, crews were able to focus on other areas nearby still needing to be searched. This incident consisted of a large response of agencies from multiple counties and states which included Berks, Lancaster, Dauphin, York, Cumberland in PA and several from MD. We were happy to assist and see it come to an end with a positive outcome. We were released shortly after the teenager was confirmed to be located by officials. #teamWBFD #uas #DJI #H20T ... See MoreSee Less

Thank you for your assistance. Look forward to working together in the future

Thank you for your assistance! Your equipment was a vital asset to us!!

Now this is a perfect example of technology being put to good use. Kudos again to WBFD.

Well done all! I rest easy knowing we h a e one of the finest teams anywhere!

This morning shortly after 12:30am the WBFD was dispatched to the 000 block of West Penn Ave in Wernersville Borough for a reported vehicle fire. As units were responding Berks DES advised that a South Heidelberg Township Police Department Officer was on location confirming a working vehicle fire. As crews arrived they encountered a sedan in the eastbound lane with the passenger compartment fully involved with fire. A single handline was stretched from Engine 18-1 and the fire was quickly extinguished. Crews were on scene for approximately 45 until the vehicle was able to be removed by Spitlers Garage & Towing. #teamWBFD ... See MoreSee Less

Keep up the great job